April 26th the LOWGC Rifle Division held our 100 meter Hunter Benchrest Match right on time thanks to the early spring thaw. Conditions were mild but shooting over the 40, 60 and 75 meter Rimfire Silhouette bunkers gave us some unexplained hi/lo shots. There were 13 shooters, some with really good shooting factory guns shot by guys who knew how to get the best out of them. There were two new range records set. Rod Jack obliterated his old Hunter Class record by 16 points and Jacques Choquette beat his old Varmint Hunter record by six points. There were more 50 targets shot with factory guns than any previous match. In VFS/Open Class there was a 2 way tie for first place and a 2 way tie for second place with the same number of points and X dots. The ties were decided by the “miss and out” method starting on the first bull of the first target.

Thanks to Spencer King, Calvin and the Jack family for driving long distances to improve the quality of our competition. Cal shot his first 3 targets clean and I thought he was going to flog us like he does in Selkirk. Thanks to the shooters and volunteers that help make these shoots possible. 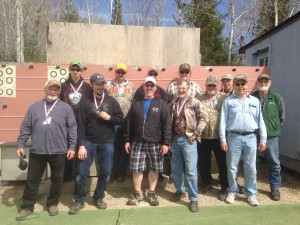 Thank you for your patience during the thaw!

A big congratulations to our biathletes who competed in the Canada Winter Games out in Prince George, BC.  Here are some photos of the action.

The Biathlon division held a Track Attack session with some junior biathletes on March 15.  Check out some of the pictures from the event.

The 2015 Rifle Schedule has been posted under the Rifle Section.