Thanks to the drive and determination of Eric Liznick and the Pistol leadership, one rack of falling plates has been returned to service on the Pistol range. The activity of shooting falling plates was shut down during the 2013 inspection unless frangible ammunition is used or the plates are bunkered to the backstop and fully enclosed. Eric was not willing to give up or lose any more activities so he said he would bring them back and he followed through on his word. This is an example of your $25 Pistol levy at work.

Back in the day there were two racks of falling plates and two shooters raced to knock them down. Due to trying to satisfy many activities with range space being at a premium, we will have to be content with one rack. Competitions can be run with an Electronic Shot Timer to record the fastest time to flatten the 6 plates.

The rules for the falling plates are the same as the dueling trees. No magnums, no .223 class rifles, minimum safe distance 15 meters.

Eric deserves our gratitude and appreciation for bringing back the pure fun factor and instant feedback of these steel reactive targets. “Life is good when you can shoot steel.” Also, thank you to the active members who were inconvenienced and took a break from their recreational shooting activities to allow construction to be completed.

This is a picture of Club member Gord Wald’s 5 shot group that he shot at 100 yards on the morning of Saturday August 15th at the Manitoba Provincial Benchrest Championships held in Selkirk Manitoba. 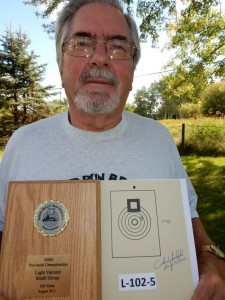 In Bench Rest vernacular, any 5 shot group shot at 100 yards measuring less than .100” center to center of the two bullet holes furthest apart is referred to as a “screamer”.

The 5 shot group need only land within the record box and does not need to be in the center as in Score shooting.

In case you think it’s a scam, there is a moving backer system behind the target which moves a blank sheet of paper at a rate of one inch per minute to verify that 5 shots were indeed fired on the target in the 7 minute time limit.

It looks like you could fire 1 shot on the target and the other 4 into the backstop and claim it was a screamer. But, the Official Scorer checks every target backer paper to verify there are 5 bullet holes, and if there’s not, the shooter is assessed a one inch penalty for each shot not on paper. A one inch penalty is impossible to recover from and will put the competitor to the bottom of ranking for the weekend.

Screamers are a little more common than a hole in one in golf. The current Selkirk Range Record for smallest 100 yard 5 shot group is a .048” shot by Murray Benson of Selkirk on August 18th 2012.

The current Canadian record for smallest 100 yard 5 shot group is .032 shot by Al Mirdoch October 9th, 1982. Gord’s target is signed and dated by the Match Director and will be framed with the backing paper verifying 5 bullets passed through one hole at 100 yards.

We are planning to offer a Black Badge course October 3rd and 4th.  This is the certification course for IPSC shooting and a requirement to participate in IPSC matches.  More info about IPSC can be found on the IPSC Canada website.  The course cost would be $150.  Please email Andrew if you are interested and for more details.

Also stay tuned for a possible closure for the week of 17th to 22nd to raise the backstop on the Pistol range. 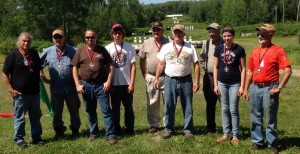 On Sunday July 26th, seventeen shooters vied for bragging rights in the summer heat as temperatures topped 30 degrees Celsius. Good thing we had the shade of our new roof to make the day more comfortable. The morning started off with calm winds, but by late morning the conditions had changed to an interesting switchy tail wind. Shooters had to bear down hard not to lose a shot.  The day was filled with good natured rivalries and anticipation of upsets that never materialized. Special thanks to Carla Jack for filling in when needed, and to Al Carlson for scoring. Also a well-deserved thank you goes out to the competitors and volunteers who came out in good number to support the Club and help run the event.

*Note: Phil Nick is undefeated in the last 9 of our Rimfire Benchrest matches that he attended since our first match July 2010.

Weather permitting every Wednesday from 6.00 – 7.00 (ish) is the Ladies Only Pistol Shoot.
This is an opportunity for you to try new guns, new grips, new stances, or just perfect what you already do. The Club guns will be there for you to try something different if you wish.
A perfect no-stress fun time to bring a friend, visit, ask questions or just shoot.
Any questions, please call Shirley or Art Ladd at 548 4858, or email asladdfamily@gmail.com 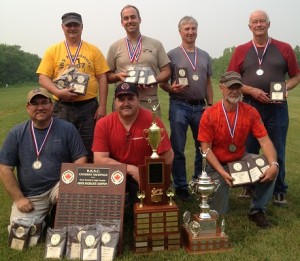 Congratulations to Team Ontario who were the runners up in the Prairie Provincial Cup (PPC)!

Congratulations to Phil Nick who came in 4th place against some very tough competition.

June 17th our Club was inspected by Chief Inspector Peter Niedermaier, Jeff Barnes and Richard Gray. Generally we came through the inspection in good shape although there are some backstop and side berm issues that will be corrected shortly.

Something new for 2015 is that all Clubs in Ontario are now required to have gunshot trauma kits. The inspectors were very impressed that we were the only club in Ontario to already have one on each range since 2012

Special well deserved thank you to the crew of volunteers who groomed the Club property before the inspection. Thanks to Eric Liznick, Colleen Coker, Al Carlson Jacques Choquette, the Division Chairmen and others. And thank you to the general members who show pride in our facility and clean up after themselves.

The Club will be closed to members on Wednesday June 17th from 8am until 5pm due to our Bi-Annual Range Inspection by the CFO.

Sunday May 31st seventeen shooters gathered at the Jacques Choquette Rifle Range in Kenora Ontario for some friendly competition. The cool morning temperature made it necessary to fire many shots on the sighter target to warm up the barrels enough to shoot straight. The wind was also a factor as the wind speed and constant change of direction made it difficult to keep your shots anywhere near the 10 ring. Despite the challenging conditions, some shooters managed to perform well with Sporter Class scores shot by juniors that were comparable to, or within reach of the Unlimited Class.

Thanks to the volunteers and shooters who came out to support the Club.